FuelRx is a premium fuel treatment that has been proven to reduce fuel consumption by at least 5 - 10%, reduce particulate emissions by 50% and cut gaseous emissions by 20% or more, while addressing the lubricity issue that is present in today’s low sulphur diesel fuels. It not only cleans and lubricates, its advanced Combustion Enhancement Technology improves combustion without the use of solvents or by increasing cetane levels.

Our Product Does it All

In the market currently, there are products that:

The only product that does all of those, is ours. 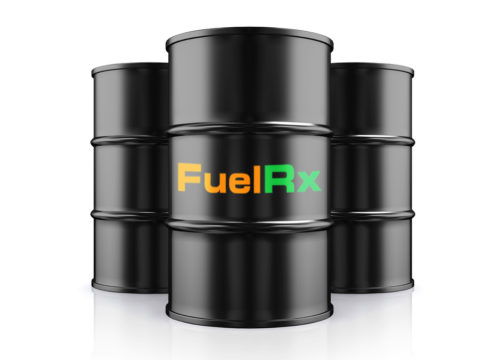 The positive effects of FuelRx start as soon as it is added to the fuel. Whether FuelRx is added to diesel, Bunker crude, or other liquid fossil fuel in a long-term storage tank, or to a fuel tank for short-term use, the positive effects begin immediately. Initially, FuelRx will begin to neutralize acid in the fuel and kill diesel bug organisms.

Acid is created in fossil fuels as a result of the sulphur content. This is true even for low sulphur fuels. The acid is created when sulphur reacts with oxygen in the storage tank and water in the fuel. The amount of acid created depends on the specific storage conditions. For example, full fuel storage tanks generate less acid because there is less oxygen present.

By contrast, storage tanks that are exposed to large hot and cold differences will create additional acid due to the fact that more water separates out from the fuel. Once acid is created, it reacts with the fuel to create gums and tars. These gums and tars then block injectors and sensors. Without the injectors and sensors working properly, incomplete fuel combustion occurs reducing fuel efficiency and increasing pollution. FuelRx neutralizes the acid in the fuel thereby reducing the creation of gums and tars. The neutralizing of the acid also increases the lifespan of fuels kept in long-term storage.

1. How is the product affected by the price of oil?

The cost of our product does fluctuate with the price of oil, but this has been less than 20 percent over the past 16 years. The cost is secured for basically the next 5 years.

2. How stable is the product over time?

Our premium fuel condition is very stable and is usually used within the year.

3. Approximately how long does it take to ship?

Our product is shipped out of Halifax, Nova Scotia and can take between 2.5 to 4.5 weeks to arrive, depending on your location.

4. Does FuelRx have a shelf life?

The product has been used 4-5 years post shipment without any difficulty or separation.

No. The product requires no stirring during that time.

FuelRx is not flammable or explosive.

7. How can FuelRx Marine help with metal contaminants?

A major problem experienced by users of Bunker C (#6) marine fuel, is the build-up of metal contaminants such as vanadium and lead within the combustion system. FuelRx Marine surface modifies the interior of the fuel, combustion and exhaust systems. Lubricity is maintained at extremely high temperatures thus denying the metals the opportunity to adhere to surfaces. The metals are ejected through the exhaust system allowing the engine to run efficiently saving money both in running costs and downtime.